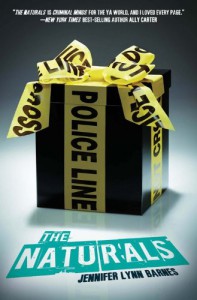 What an entertaining book! Cassie is a 17 year old girl whose mother was murdered five years ago and who has the extraordinary talent of being a natural at profiling people, of being able to say what or who they are just by looking at them for a few seconds. Out of the blue, she is invited to participate in a specialized and under-the-radar group of teens with special abilities at the FBI, called The Naturals. Of course, she agrees, and the story takes off from there.

I love murder mysteries and I liked the mix with the YA format. The result was an easy to read, interesting serial killer story with fun, intriguing characters. The end left me a bit unsatisfied because there were a few things that didn't seem too believable for me, but it was still a nice read. I already placed a hold on the next book at the library!