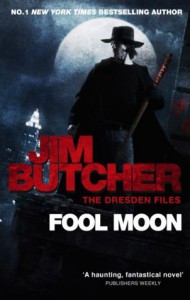 The second book of this series was SO much better than the first one!

We get to see a bit more about Harry's background, there's some serious questions raised about his mother and father than I'm sure are going to be answered along the way. I really liked that the character is starting to gain more depth and I hope it continues like this.

In Fool Moon, there have been some gruesome murders around full moon, and everything is pointing to some kind of werewolves and to a certain mob guy who's starting to lose his cool out of pure fear. Harry gets beat up A LOT (maybe too much?), but all in all, this book keeps you interested all the time. Four stars!