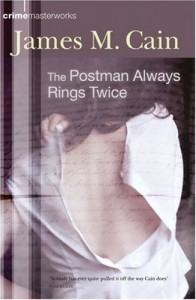 Nick Papadakis offers Frank Chambers a job at his diner. Frank was just passing by and he's a drifter, but since he has no money he figures he can stay for a while. There, he meets Cora, Nick's wife. They fall in love. They want to be together. She can't just run away and leave everything she's worked for behind. So there's only one solution. They have to kill Nick.

At first, this may seem like a common enough plot. But you have to consider two things: (1) this was written in 1934, so it was probably written before everybody else copied the idea, and (2) the writing is incredibly good. You see things through Frank's eyes, and the author does an excellent job at explaining things the way he sees them. This book is short, dark, violent, interesting and exasperating in just around 100 pages. I completely understand why it is so famous even after all this time. Four stars!!

I just realized that one of the movie adaptations has Jessica Lange and Jack Nicholson in it! Now I just have to watch it!